Sad news for those Shake fans

But Thursday, just a few months after celebrating its 40th anniversary, Boulder Beer Company announced it is shrinking operations, laying off 21 employees and ending widespread distribution, which means that its beer will soon be available only at its Boulder brewpub.

It's super sad! I went out after the meeting and ordered a Shake to pay tribute. One of my favorite Chocolate beers (ok, it is my favorite), I'll be ordering lots more the couple months we've got left of it 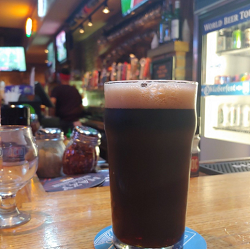 Oh crazy, hadn't heard that. Erica and I had our wedding reception at Boulder Beer. The used to not be open on weekends so they'd rent out the entire place for events. I've still got my "Goatshed Gang" glass (their mug club). Sad days...
Top


Less than two months after saying that it planned to stop distribution of its beers after nearly 40 years at the end of 2019, Boulder Beer reversed course on Monday, announcing it’s entered into a partnership with a Denver-based contract brewer that will take over the manufacturing, distribution and marketing of all of the brewery’s products outside of its taproom.

Sleeping Giant — the only company in the western U.S. specifically dedicated to making beer for other brewers, typically those who have a shortage of manufacturing space in their taprooms or who have not yet secured a physical location for their breweries — will continue to distribute Boulder Beer without interruption to its current service area, which represents 29 states, though its future in every one of those states is still to be determined. It will focus specifically on six of the company’s best-selling products — Shake chocolate porter, Mojo IPA, Buffalo Gold, Hazed & Infused pale, Spaceman double IPA and Due East New England-style IPA.


Three months after announcing that it would stop packaging and distributing its beer — and lay off more than twenty employees — Boulder Beer Company has released an even more unexpected and immensely more depressing statement: The company plans to sell the its building and close up shop entirely on January 18.

Although the Sleeping Giant contract brewery in Denver will continue to brew six of Boulder Beer's flagships and to distribute them under a new agreement, the move will, for all intents and purposes, put an end to the oldest craft brewery in the state and an iconic business for many Coloradans.

Friends and customers of Boulder Beer Company – For several reasons, we have made the difficult decision to close The Pub on Wilderness Place on January 18th. Thank you all for an amazing 40 years.