This year's Lawrence Brewers Guild Big Brew Off opens up at 10am on March 7th!
Comp registration site: http://www.lawrencebrewers.org/competition

The LBG Big Brew Day Brew-Off is AHA-sanctioned and open to any amateur homebrewer age 21 or older. The categories and subcategories are limited and will be judged according to the 2015 BJCP Style Guidelines. The competition committee reserves the right to combine categories based on the number of entries. All possible effort will be made to combine similar styles. All beers in combined categories will be judged according to the style for which they were originally entered.

ACCEPTED CATEGORIES ENTRANT ELIGIBILITY ENTRIES SHIPPING LOCATION DROP-OFF LOCATIONS Each entry requires two 12-ounce bottles (with rubberband, no markings, etc.) Any lettering or graphics on the caps should be completely obscured with a black marker so as to maintain anonymity. Bottles will not be returned to entrants. The competition organizers are not responsible for mis-categorized entries, mailed entries that are not received by the entry deadline or entries that arrive damaged. 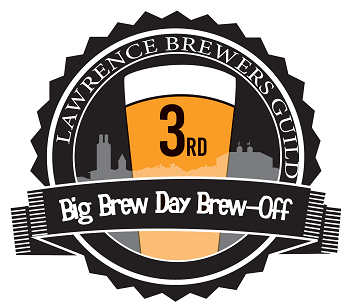